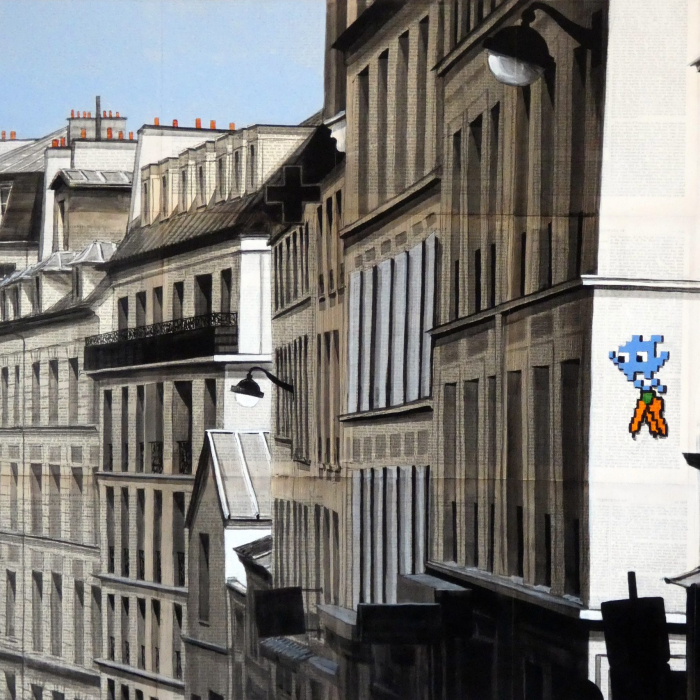 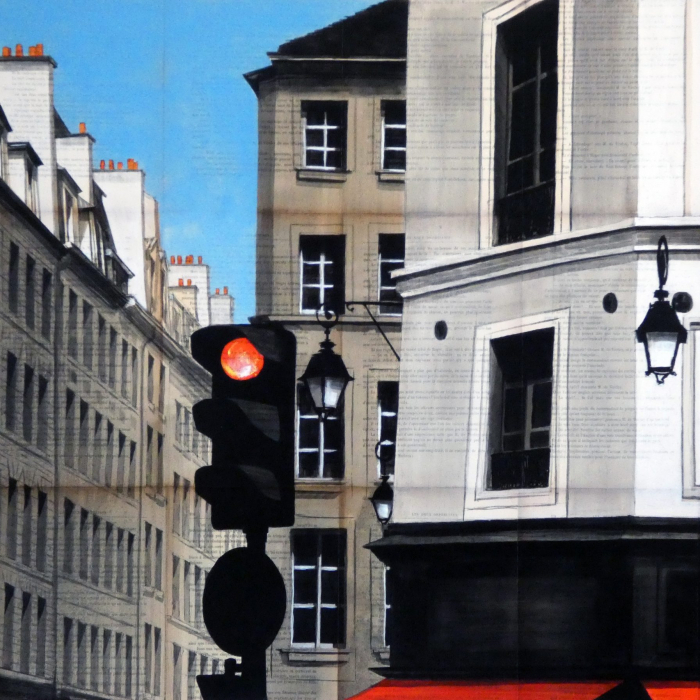 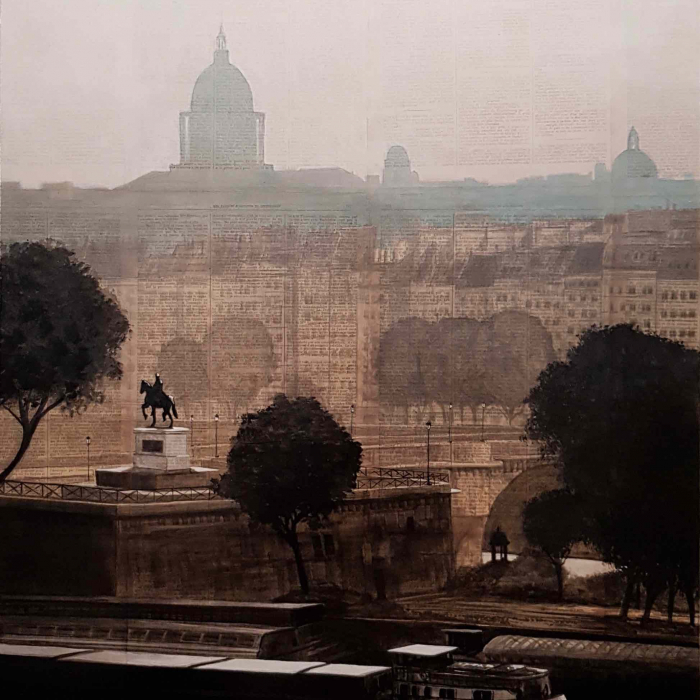 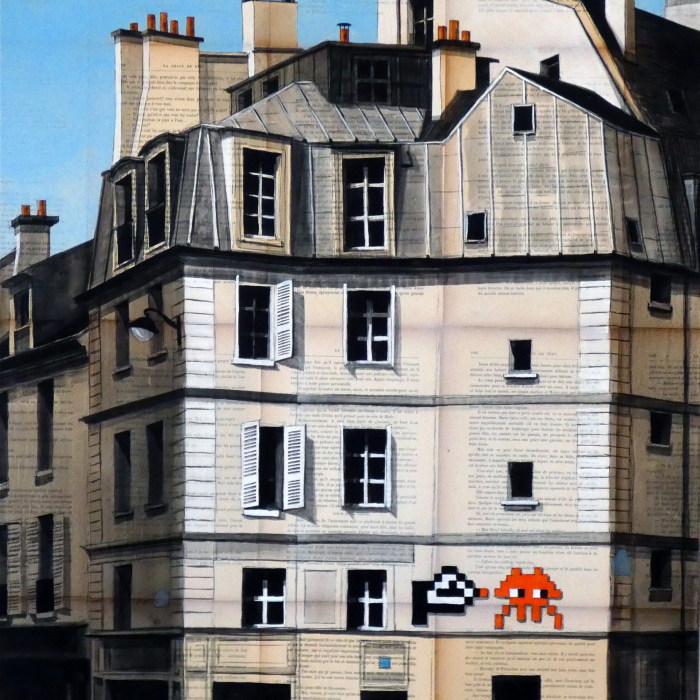 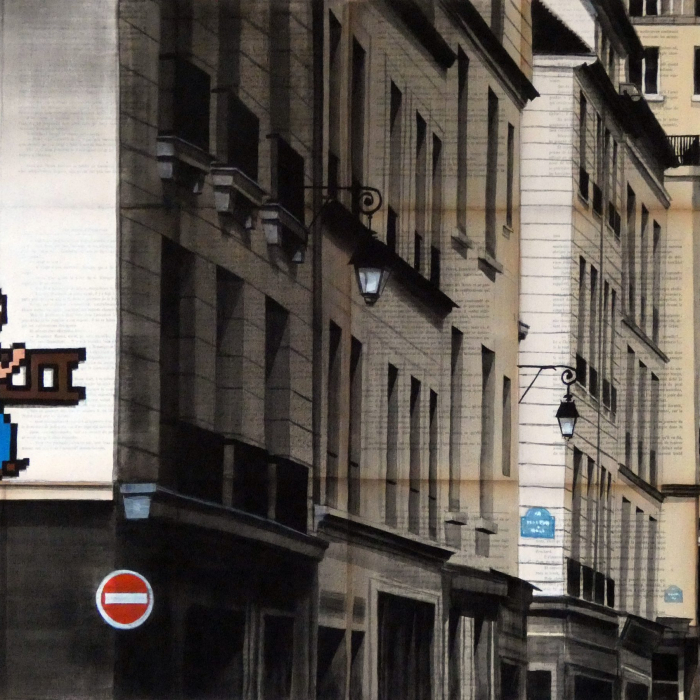 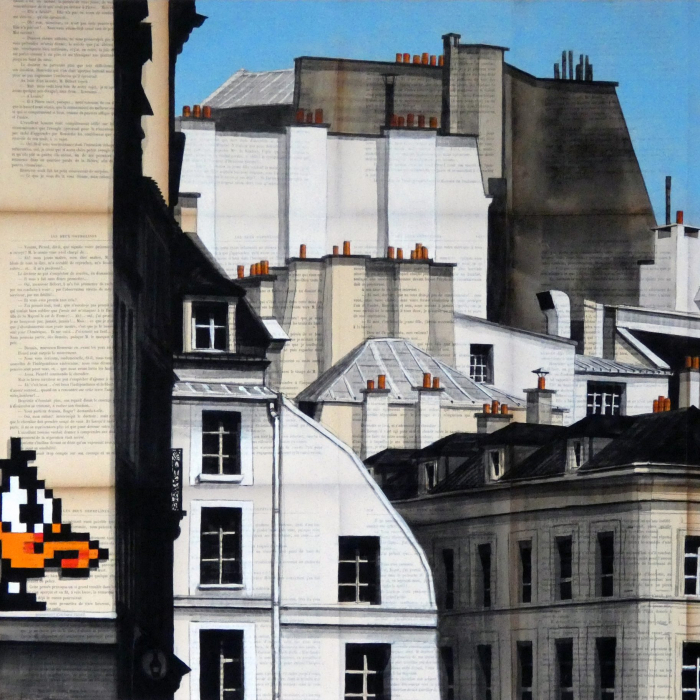 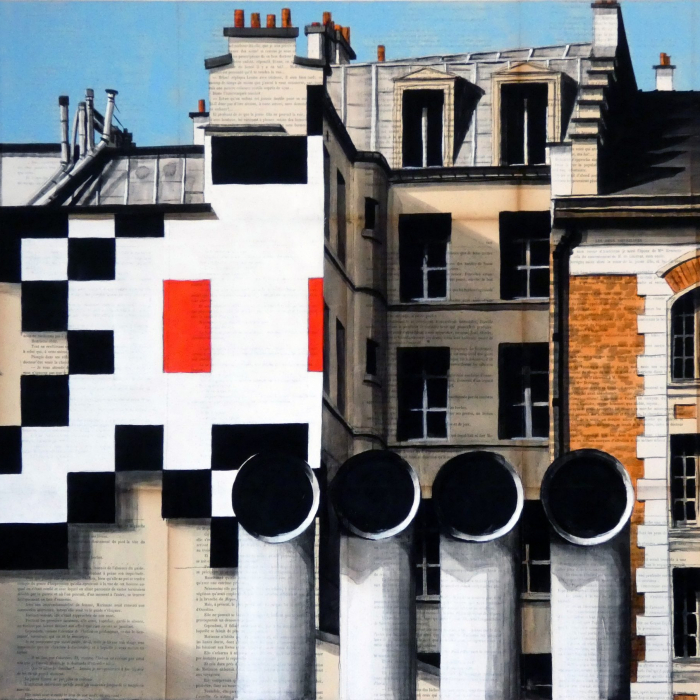 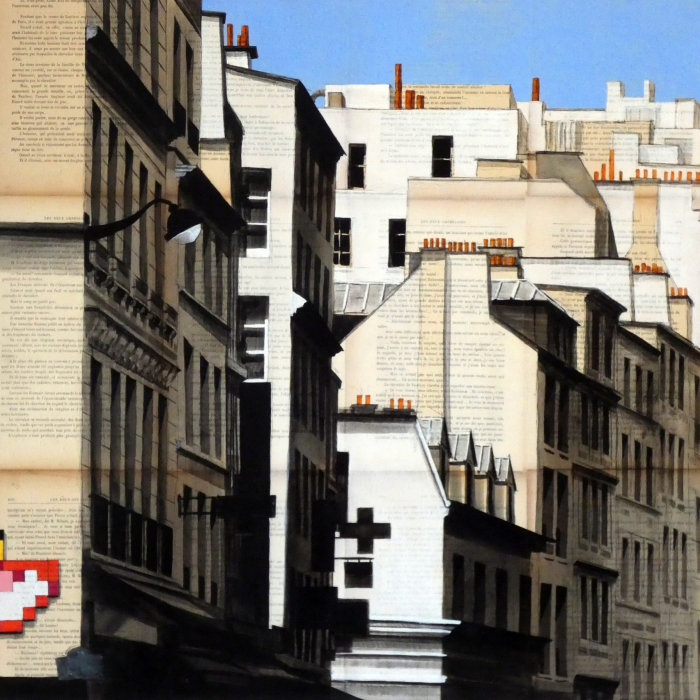 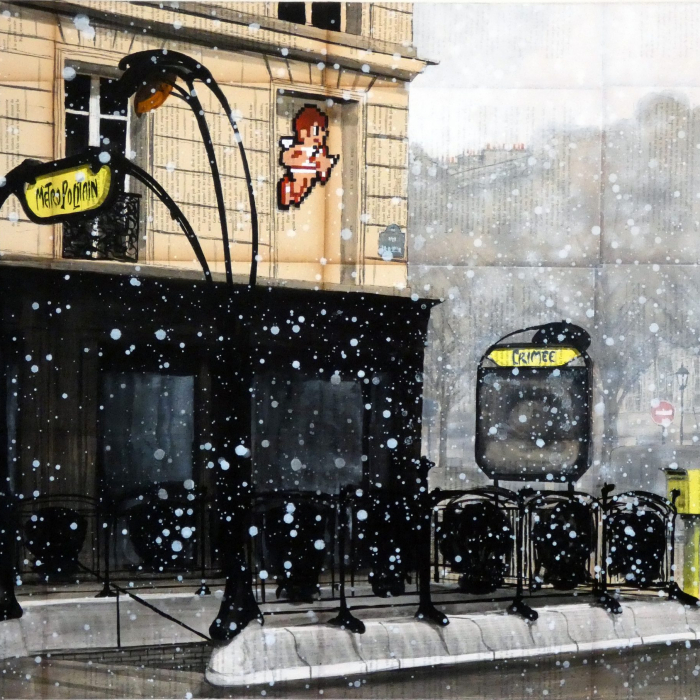 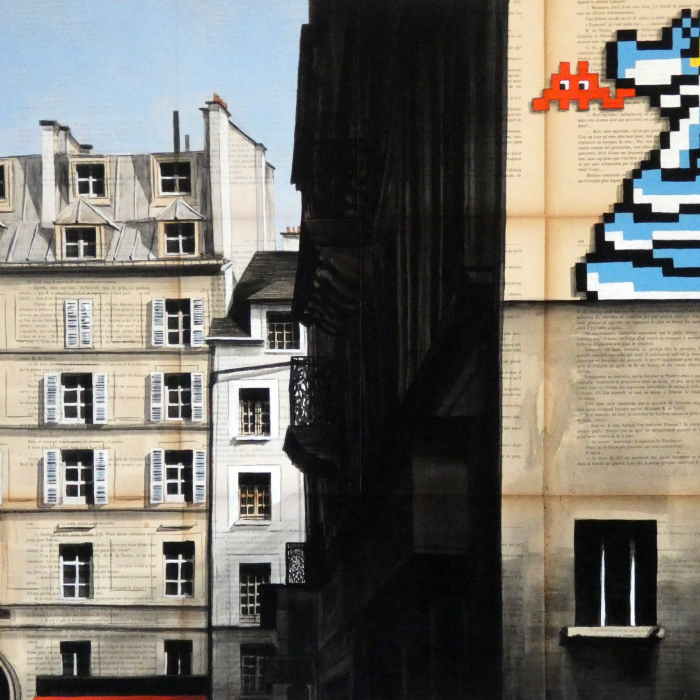 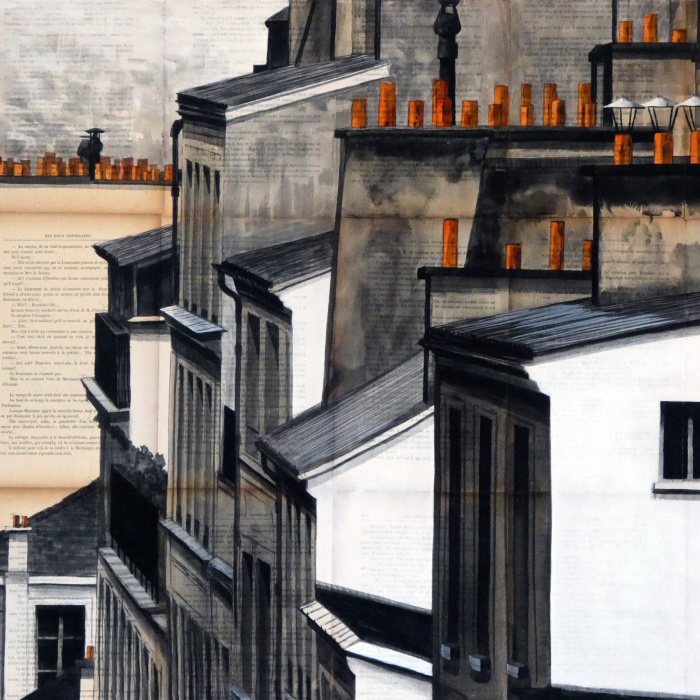 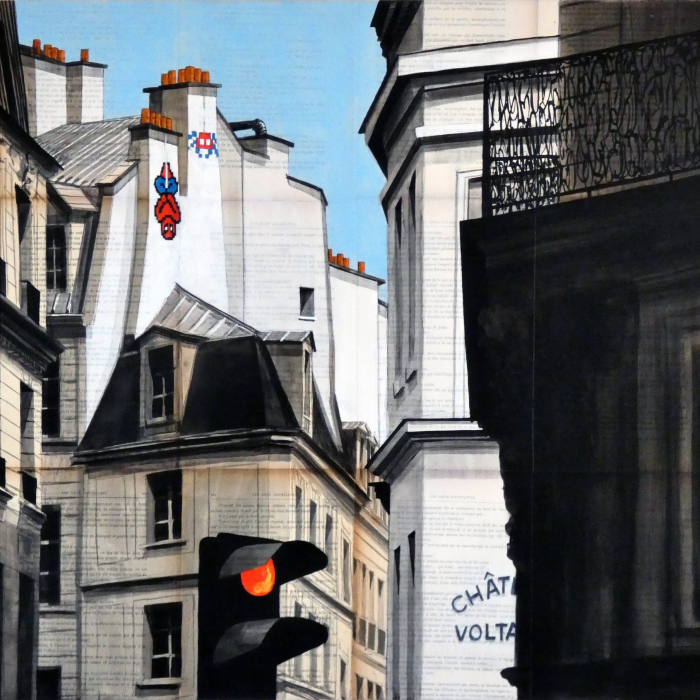 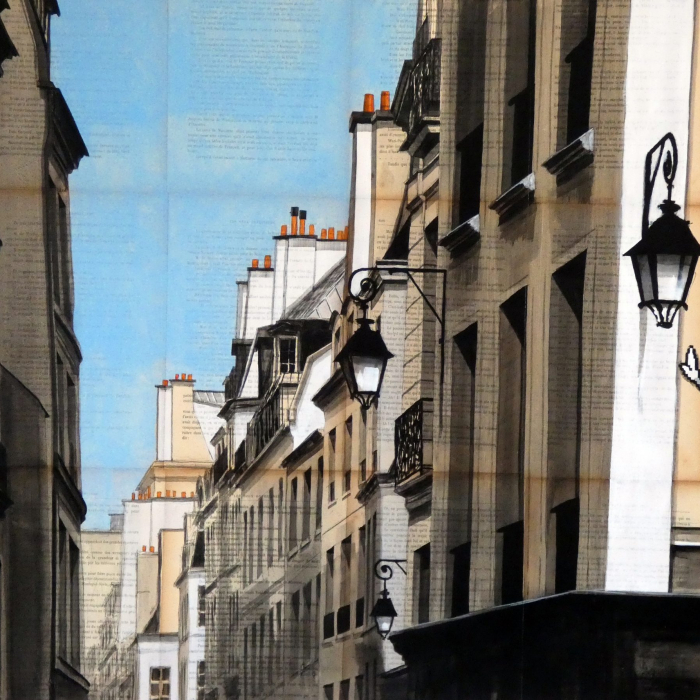 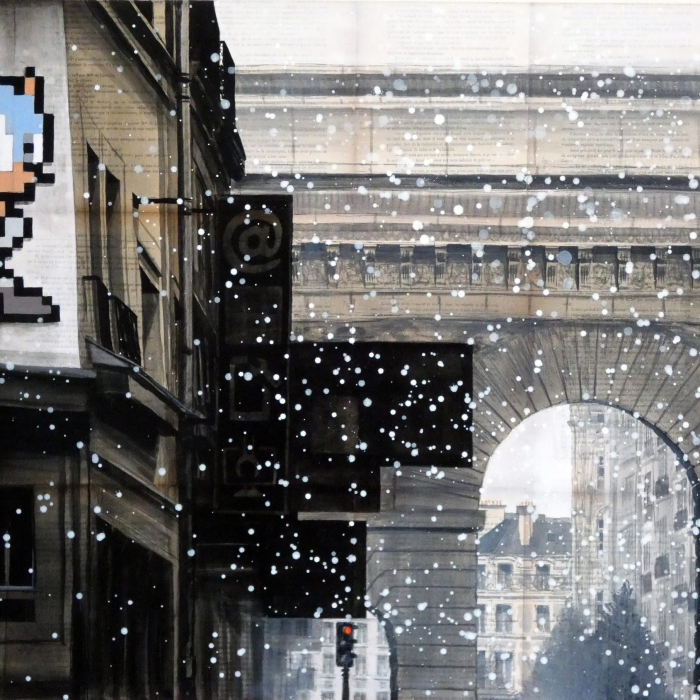 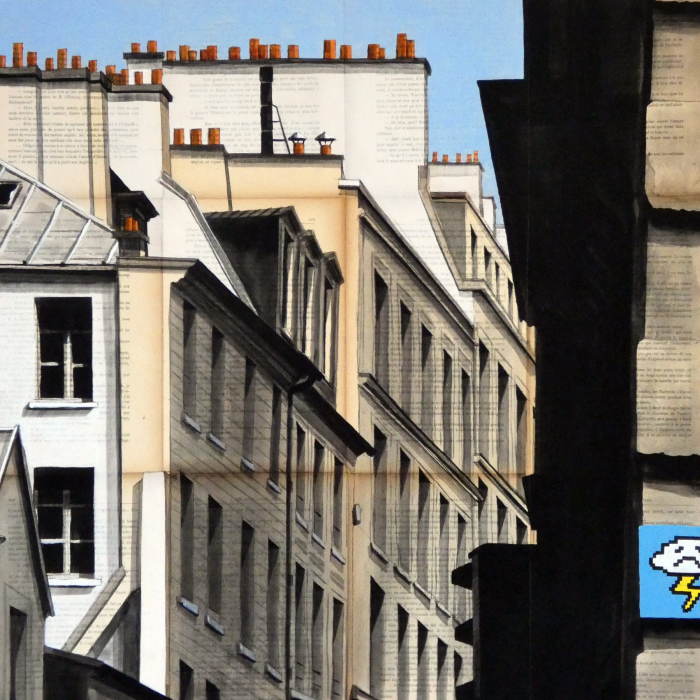 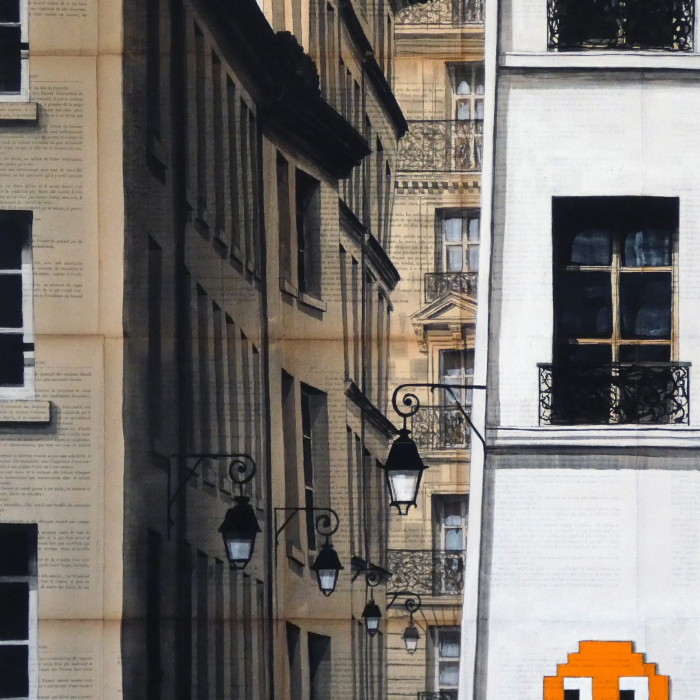 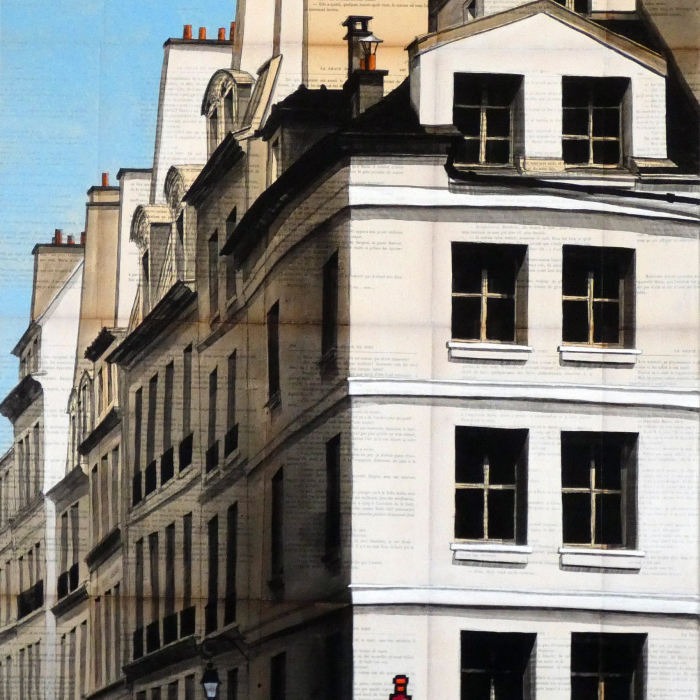 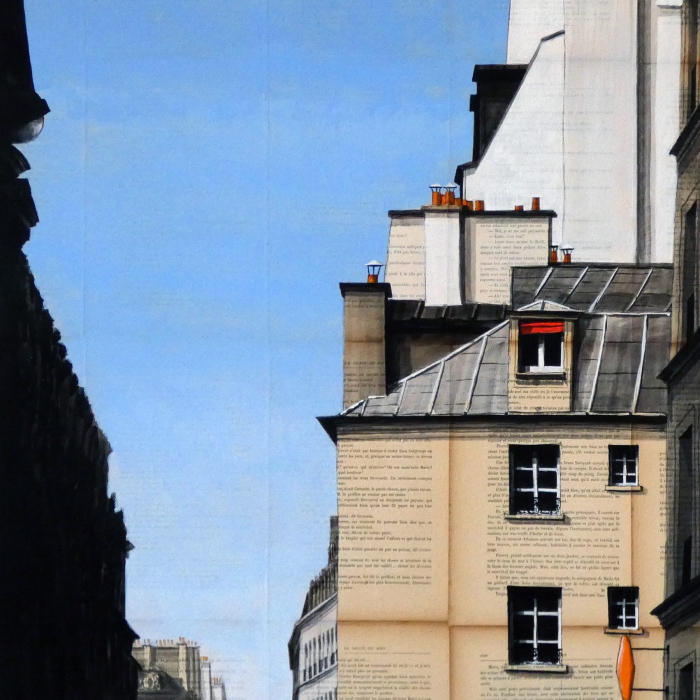 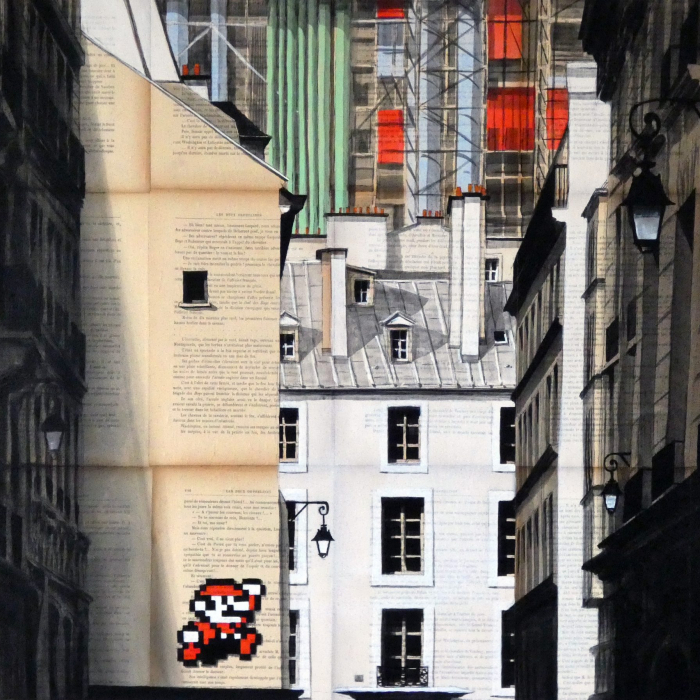 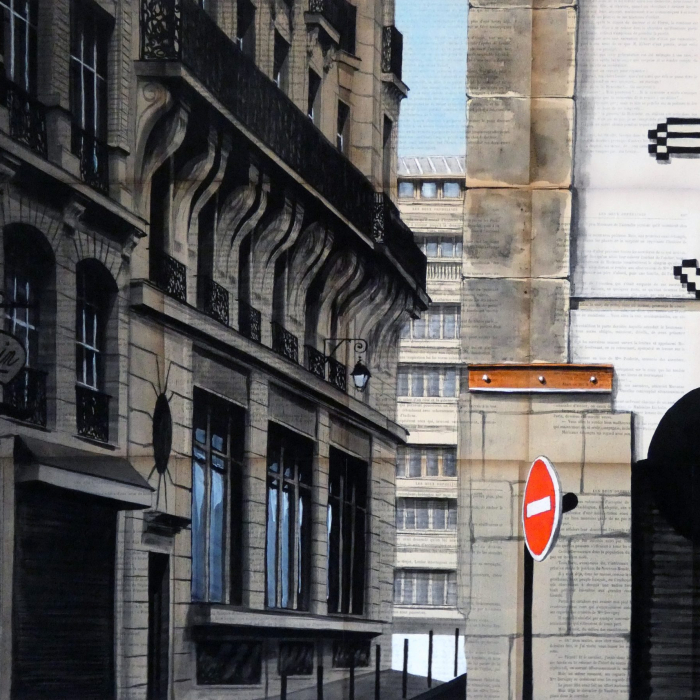 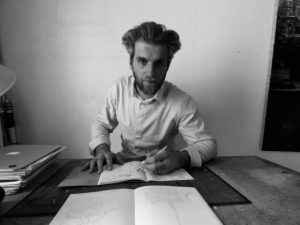 French painter Guillaume had his first exhibition at 16 years old where he won a painting contest with his Chinese ink and feather artworks. After graduating from the Ecole des Arts et Techniques in Paris with a  scenography and architecture degree, he embarked on his creative career as an independent painter for event, television, and theater companies.

In the early 2000s, Chansarel began to explore a new technique that soon became his trademark: drawing directly on the pages of worn books. What interests him, despite popular claims of “the death of print,” is the superposition of both the text and the drawing—two modes of man-made communication gathered in a single place. It wasn’t long before the artist cut the pages from these books to press them on canvas, allowing him to work in a different—and bigger—format. In 2003, he exhibited his Parisian series “Le Nez en l’Air” on prestigious Matignon Avenue to great success. A year later, New York City was at the center of his work; the city gave Chansarel the idea to explore the world’s megalopoli and marked the advent of his artistic method and favorite subjects: architecture and urbanism. As stated by Luxe Magazine,

The Parisian artist Guillaume Chansarel belongs to this category of increasingly rare inhabitants of large cities: that of the happy city dweller. You will not hear him complaining about the pollution, the traffic or the stress of big cities: for him, happiness is in urban chaos!

The artist’s technique, based in India ink and acrylic paint, has continued to evolve since his first exhibition. The choice of the books on which he paints forces him to constantly adapt his approach. Guillaume says, “it is impossible to work the same way on Asian paper and on Western paper!” His artworks found their strength while respecting the proportions and the materials in a systematic way. Straight lines, dizzying perspectives, intensity of shadow and light, and bursts of color plunge viewers into the heart of his subject. We are transported from the edge of his paintings to the foot of a building, tirelessly amazed and fascinated.

Chansarel’s latest endeavor was to create a book celebrating the beauty of New York City. New York is life, noise, metal, roaring, sirens, shouting, flashing lights… It is impossible to transcribe all this into a single drawing—yet he wanted to be able to relive and, especially, to share the experience of wandering along Broadway. As readers turn the pages of Drawing Avenue, they travel from painting to painting just as they might walk from block to block—all 247 of them.